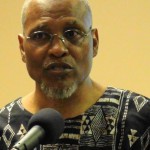 Mwalimu K. Bomani Baruti Biographical
Sketch Mwalimu K. Bomani Baruti is the co-founder and co-director of Akoben Institute, an independent Afrikan centered full-time and after-school home schooling and tutorial program for middle and high schoolers. Over the last half decade, Bro. Baruti has also taught various Afrikan centered evening classes for adults at the Institute and online. Included in these was a writers’ workshop for those interested in writing and self-publishing. Moreover, he is an experienced chess teacher who taught chess at independent Black schools for over a decade. Bro. Baruti is the author of eighteen self-published books: Excuses, Excuses: The Politics of Interracial Coupling in European Culture, negroes and other essays, Chess Primer: An Introduction to the Game of Chess, The Sex Imperative, Homosexuality and the Effeminization of Afrikan Males, Asafo: A Warriors Guide to Manhood, Complementarity: Thoughts for Afrikan Warrior Couples, Mentacide and other essays, Kebuka!: Remembering the Middle Passage Through the Eyes of Our Ancestors, Eureason: An Afrikan Centered Critique of Eurocentric Social Science, Battle Plan, Notes Toward Higher Ideals in Afrikan Intellectual Liberation, Sesh: An Afrikan Centered Guide to Writing and Self-Publishing for Warrior Scholars, Nyansasem: A Calendar of Revolutionary Daily Thoughts, Yurugu’s Eunuchs, Centered: Building Afrikan Realities, IAW: A Warrior’s Character and Message to The Warriors. He is currently working on a book entitled Asylum which examines the insanity of european culture and Identity which will reconceptualize a number of sociological concepts in Afrikan centered terms. Bro. Baruti (fka Larry D. Crawford) served as Assistant Professor of Sociology at Morehouse College from 1991 to 2001. Committed to the students, he has served as the faculty advisor to numerous student organizations at Morehouse College, as well as other institutions in the Atlanta University Center. He received his graduate training at the University of Chicago and taught at Chicago State University as well. Recognized for his dedication to the community, he has been keynote speaker, guest lecturer and moderator for numerous forums, programs and activities in a number places around the country and world. His lecture topics have ranged from Afrikan manhood, male/female relationships, european sexual insanity, interracial coupling to the Middle Passage. Bro. Baruti lives in Atlanta, Georgia with his wife of 28 years, Yaa Mawusi Baruti, also co-founder and co-director of their homeschooling program.